Mesut Özil Joins Hands With The Football Association And Football For Peace To Promote Hope, Inclusion And Opportunity For The South Asian Community Through ‘The Beautiful Game’ In Bradford as First Pilot

Football for Peace and the Football Association are co-launching the Mesut Özil Development centre at the University of Bradford alongside Bradford City AFC, supported by Sporting Equals at 2pm, Wednesday, 6th October 2021.

The Football for Peace Mesut Özil Centre, sponsored by Innaree, will be hosted at the University of Bradford and run football and life skill sessions at Bradford City AFC's training ground providing opportunity for South Asian players.

The Bradford centre will be the first. Other FfP Centres, will also be co-branded with professional players and clubs supporting the reduction of inequalities and promoting opportunities for members of ethnically diverse communities to be able to fulfil their aspirations by providing pathways into elite football and education.

In the UK, ethnically diverse communities have suffered from a lack of opportunities and professional facilities within the football industry. There are over 3 million South Asians in the UK. In spite of this, the South Asian diaspora is largely absent at a playing level, administrative and coaching level throughout the football world.

The centre will also provide workshops for parents, who are a key part of the process. A special Football Award is also launching supported by the UN SDG to provide opportunities outside of football.

The Football for Peace Mesut Özil Centre is working closely with the UN SDG Action zone and will be contributing to 2030 agenda by reducing inequalities, promoting diversity, promoting health and education in line with the United Nations Sustainable Development Goals and will be unlocking and reshaping the relationship between the community and the football community as a whole.

This is the first time an initiative like this is kicking off specific for the South Asian Community and is welcomed by the Football Association, who are also providing sponsorship toward this.

There are a number of Premier League and English Football League Clubs who have signed up to the initiative which promotes equality, diversity and inclusion.

This is not the first time Siddiqi and Özil have joined forces for good.

In 2020, under lockdown Dr. Erkut Sögüt who represents Özil, brought the pair together to deliver 500,000 meals which were going to waste management from Wembley Stadium across the UK. Ozil has become known for his work outside of football, including paying for meals, supporting homeless centres and  women's groups in north London whilst he was at Arsenal FC.

Mesut Özil says: "I have always been surprised why the South Asian Community are only allowed to be fans of the game, why are we not seeing more players or managers breaking into professional football? I want to promote them, give them an opportunity to be successful both on and off the pitch. I myself am from an ethnic diverse background and understand the challenges.

I hope the Football for Peace Mesut Özil Centre will become the platform they need.”

Kashif Siddiqi former Pakistan International, Co-Founder of Football for Peace and Football Diplomat says: “Football has given me so much, and working with Mesut we want to create a platform that will provide a framework inside the Football pyramid between professional clubs and also our community. Whilst it is important to see greater representation in professional sport, it is also vital to recognise the power football can have on communities. Our ongoing engagement with young people and communities also seeks to contribute to reduce the devasting effects of Covid-19 which has also led to reducing the amount of sports participation, especially South Asian Community are engaging in.”

Rupinder Bains, a Football Association Board Member and Board Sponsor for Asian Inclusion says: “The FA is proud to support this important initiative which aligns to our Asian inclusion strategy, Bringing Opportunities to Communities. All people regardless of ethnicity or background should be able to play and enjoy the game. Through this initiative, we hope to see more young people from historically underrepresented ethnic backgrounds breaking into academy structures, creating a stronger future pipeline of talent for the professional game. It is a promising step forward.”

University of Bradford Vice-Chancellor Professor Shirley Congdon says:  “We are excited to announce the University's partnership with Football for Peace. The University's vision is a world of inclusion and equality of opportunity for all, and this partnership is a fantastic example of how we can achieve this. Through this partnership we hope to use football to engage with young people in our communities, to show how sport can contribute to resolving pressing social and environmental issues, and to help them become future leaders who will make a difference to societies around the world.”

Bradford City Football Club CEO, Ryan Sparks, says: "We are delighted to form part of the Mesut Özil Football for Peace Development Centre, that will facilitate the growth and inclusion of the South Asian community in football. Inclusion and diversity is fundamental to the success of our club and Bradford as a whole – and we pride ourselves on providing a welcoming and warming environment for all"

Abu M Kamruzzaman, MD of Innaree, says:  “The work carried out by Football for Peace in recognising the need for these academies and to support initiatives such as greater inclusion of the South Asian Communities in football, is key to tackling inequality. At Innaree we recognise the synergy between both organisations, in bringing positive change and 'wellness' into people's lives, communities and the world we live in. We look forward to continuing the close working relationship with Football for Peace, Mesut Özil and the team, achieving change where it is needed.”

Arun Kang OBE, CEO of Sporting Equals “We are really pleased and excited to be a partner of the national initiative led by Football for Peace. We know that the South Asian football participation in the UK is considerable, as is its fan base. However, the high levels of participation in football is yet to translate to cultivating South Asian talent towards elite players. This initiative promises greater action towards achieving better South Asian representation in the professional sport, and we welcome the news today that The Football for Peace Mesut Özil Development Centre will be the bridge between community organisations, including those we work with at Sporting Equals, and elite clubs to encourage greater participation in South Asian communities and others from ethnically diverse backgrounds.” 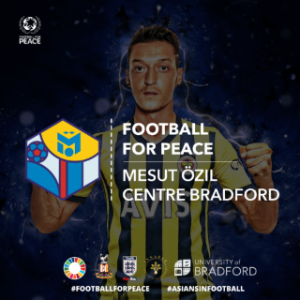