We are hiring! Check out our roles for Development and Partnerships Manager - Head of Programmes - Community Grants Officer - Marketing and Communications Officer

Breaking Boundaries is a three-year programme (2018 –2021) funded by Spirit of 2012, supported by the England and Wales Cricket Board (ECB) and The Institute of Community Cohesion (Icoco).

Over 60 individuals came together in their bubbles to walk laps of Calthorpe Park, collectively smashing the step 10,000 step target! Walkers celebrated their success at Unity Streets CIC's annual street party (social distance style) where there were activities for all ages to enjoy including cricket drills courtesy of Breaking Boundaries.

This event was organised by Unity Streets CIC's volunteers including three Community Champions who did a fantastic job of bringing together families from various backgrounds. 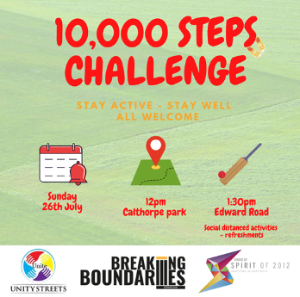 This included Black, Mixed, White, South Asian and Arab communities who spent the afternoon in each other's company and got a flavour of Caribbean food and music.

After 5 months of lockdown it was crucial to reignite social connectedness amongst the community whilst putting a focus on the importance of physical wellbeing.

Many local organisations recognised this and supported Unity Streets CIC in various capacities including Breaking Boundaries Coach, Usman Khan, and Coordinator, Chandni Paul who ran cricket drill activities. There was a clear sense of belonging from all at the event which is a testament to the great work that Unity Streets CIC has done to build up the community. 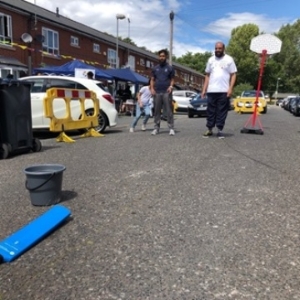